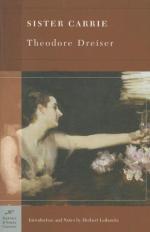 Sister Carrie - Research Article from Literature and Its Times

Theodore Dreiser was born in Terre Haute, Indiana in 1871. After a difficult childhood spent in poverty, Dreiser began writing for Chicago newspapers in 1892. After nearly a decade of success in journalism, Dreiser composed his first novel, Sister Carrie, in 1900. In the work, Dreiser realistically portrays the social and economic factors of his society. It is for this quality of realism that he has become best known.

The growth of Chicago. Though the Great Chicago Fire of 1871 had destroyed most of the city's newer buildings, subsequent decades saw a rebuilt Chicago rise dramatically from the ashes. By 1890 the territorial confines of Chicago stretched to 165 square miles. The growth of American industry had made it a city of wealthy tycoons such as Philip Armour, the pork-packing magnate, and George Pullman, the builder of railroad cars. As...

More summaries and resources for teaching or studying Sister Carrie.

Sister Carrie from Gale. ©2008 Thomson Gale, a part of the Thomson Corporation. All rights reserved.