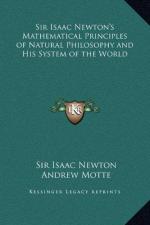 Sir Isaac Newton - Research Article from Science and Its Times

This encyclopedia article consists of approximately 1 page of information about Sir Isaac Newton.

English mathematician and physicist who, independent of Gottfried Leibniz, invented the calculus. Newton's contribution to physics was perhaps more influential than that of any other person in history. His shared, though bitterly contested, discovery of the calculus ranks as one of the greatest human intellectual achievements of all time. Using calculus, Newton developed his theories of motion, which are the underpinnings of Newtonian physics, still used to determine many important facts about the solar system, the universe, and the behavior of objects virtually anywhere.

Sir Isaac Newton from Gale. ©2005-2006 Thomson Gale, a part of the Thomson Corporation. All rights reserved.