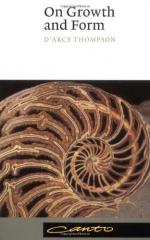 In his studies of natural history, D'Arcy Wentworth Thompson combined on the one hand a penchant for the application of mathematics, and on the other hand an enthusiastic interest in the classics. His most significant work was On Growth and Form (1917), in which he departed from the prevailing wisdom of his time by showing mathematical properties in the form of various natural structures.

Born in Edinburgh, Scotland, on May 2, 1860, Thompson was the son of a classics professor also named D'Arcy Wentworth Thompson. His mother, Fanny, died giving birth to him. From an early age, Thompson was influenced by the mother's family, the Gamgees, which included many scientists and doctors. In addition, his father's encouragement ensured a lifelong interest in Greek and Latin, both languages in which Thompson became highly adept.