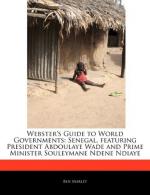 This encyclopedia article consists of approximately 10 pages of information about Senegal.

"As an African, I take on the right to implicate myself in everything happening on the continent…I refuse to belong to this trade union of presidents. Mugabe or not Mugabe is not my concern. My concern is what the people of Zimbabwe wanted."

Located in West Africa, midway between Arab-Mediterranean North Africa and the tropical rain forest countries along the Gulf of Guinea, the Republic of Senegal covers an area of 197,161 sq km (75,750 sq mi). Senegal was originally colonized by the Portuguese, who were followed later by the French. The country gained its independence from France on 4 April 1960 and was declared a republic on 20 August of the same year.

The capital of Senegal is Dakar, which with one million inhabitants is one of the great seaports and industrial complexes of West Africa. As of 2002, Senegal's...

Senegal - Abdoulaye Wade from Gale. ©2005-2006 Thomson Gale, a part of the Thomson Corporation. All rights reserved.