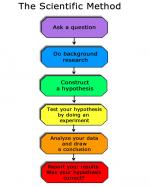 This encyclopedia article consists of approximately 4 pages of information about Scientific Method, Measurements and The.

A common misconception about the scientific method is that it involves the use of exact measurements to prove hypotheses. What is the real nature of science and measurement, and how are these two processes related?

The Nature of Scientific Inquiry

According to one definition, the scientific method is a mode of research in which a hypothesis is tested using a controlled, carefully documented, and replicable (reproducible) experiment. In fact, scientific inquiry is conducted in many different ways. Even so, the preceding definition is a reasonable summary or approximation of much scientific work.

Science, at heart, is an effort to understand and make sense of the world outside and inside ourselves. Carl Sagan, in The Demon-Haunted World: Science as a Candle in the Dark, noted that the scientific method has been a powerful tool in this effort. He concluded that the...

More summaries and resources for teaching or studying Scientific Method, Measurements and The.

Scientific Method, Measurements and The from Macmillan. Copyright © 2001-2006 by Macmillan Reference USA, an imprint of the Gale Group. All rights reserved.