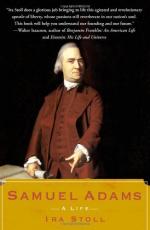 This encyclopedia article consists of approximately 12 pages of information about Samuel Adams.

On hearing some of the first gunfire of the Revolutionary War:
"What a glorious morning is this!"
Portrait: Samuel Adams.
Reproduced courtesy of the National Archives and Records Administration.

Samuel Adams was a leading organizer of the independence movement in Massachusetts and the other American colonies that culminated in the Revolutionary War and the creation of the United States of America. Though he was an outstanding writer, speaker, and planner, he kept himself so far in the background that historians have found it difficult to determine the total scope of his contributions to the birth of the nation.

Samuel Adams was the son of a generous beer brewer, also named Samuel, and Mary Fifield Adams, his religious wife. Mary Adams passed her Puritan beliefs on to her three children—Samuel, his...

More summaries and resources for teaching or studying Samuel Adams.