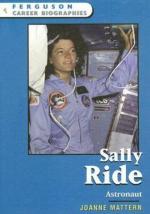 Sally Kristen Ride - Research Article from Science and Its Times

This encyclopedia article consists of approximately 3 pages of information about Sally Kristen Ride.

Sally Ride was the first American woman to fly in space, her accomplishment symbolizing the equal opportunities for women offered by astronautical careers. Although a Soviet woman had orbited the earth two decades previously, Ride's mission represented the National Aeronautics and Space Administration's (NASA) commitment for all individuals to have access to space exploration as well as reinvigorated public enthusiasm for the space program. While the Soviet cosmonaut's pioneering flight was a publicity stunt to boost the Soviet Union's political prestige during the Cold War, Ride's achievement and vision of future goals in space represent the possibilities offered by the inclusion of a diverse group of space travelers to advance aerospace knowledge.

Born on May 26, 1951, at Los Angeles, California, Ride was born to Dale and Joyce (Anderson) Ride. Ride benefited from her education at Beverly Hills's Westlake School for Girls, where...

Sally Kristen Ride from Gale. ©2005-2006 Thomson Gale, a part of the Thomson Corporation. All rights reserved.