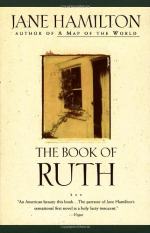 Ruth and Naomi - Research Article from Encyclopedia of Religion

Jane Hamilton
This encyclopedia article consists of approximately 5 pages of information about Ruth and Naomi.

RUTH AND NAOMI have long enjoyed favored status in Jewish and Christian tradition. Ruth is often portrayed as a paragon of virtue and a model for religious conversion. However, feminist scholars have tended to replace idyllic interpretations with more complex understandings of the scriptural narrative that bears Ruth's name.

The Book of Ruth

Ruth, one of two Hebrew Bible books titled after women, is a beautifully crafted tale consisting of eighty-five verses divided into four chapters. More than half the verses feature dialogue among main characters. Naomi, Ruth, and Boaz are leading figures in Ruth. Orpah and an unnamed relative/redeemer play key roles near the beginning and end. Bethlehem's women and (male) elders also figure importantly in the story. The narrative is framed by the death of three men and the birth of one child. The basic plot is as follows:

More summaries and resources for teaching or studying Ruth and Naomi.

Ruth and Naomi from Macmillan. Copyright © 2001-2006 by Macmillan Reference USA, an imprint of the Gale Group. All rights reserved.