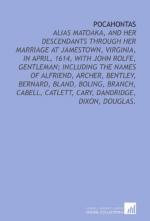 This encyclopedia article consists of approximately 6 pages of information about Rolfe, John.

John Rolfe is perhaps best known today as the Jamestown colonist who married Pocahontas (see entry), the Powhatan "princess," in order to seal an alliance between English settlers and the Powhatan tribe. Yet Rolfe had an even greater impact on Virginia. In 1612, two years after he arrived in the colony, he perfected a strain of tobacco for export to England. (Tobacco is a broad-leaf plant that is grown in warm climates. In the seventeenth century it was harvested, dried, and shredded for use in smoking in pipes. Native Americans had long been using tobacco in this manner. Today tobacco is also rolled in small, thin pieces of paper to make cigarettes.) Soon tobacco...

More summaries and resources for teaching or studying Rolfe, John.