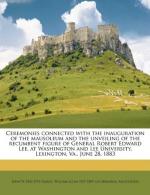 This encyclopedia article consists of approximately 13 pages of information about Robert E. Lee.

As commander of the Army of Northern Virginia,
became the Confederacy's most famous military
leader of the Civil War

"With all my devotion to the Union and the feeling of loyalty and duty of an American citizen, I have not been able to make up my mind to raise my hand against my relatives, my children, my home."

Robert E. Lee. (Courtesy of the Library of Congress.)

General Robert E. Lee ranks as the most famous and beloved Confederate soldier to fight in the American Civil War. As commander of the Army of Northern Virginia, he masterminded many of the South's greatest military victories. Combining clever battlefield strategy with inspiring leadership, he nearly engineered an ultimate Confederate victory. As the conflict progressed, however, improved performance by the larger Union Army proved too much...