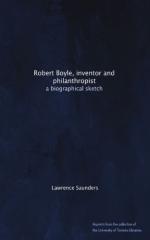 Robert Boyle - Research Article from Science and Its Times

This encyclopedia article consists of approximately 3 pages of information about Robert Boyle.

Robert Boyle never earned a college degree. As a physicist, however, he performed some of the earliest experiments with gases. As a chemist, he helped to separate the science of chemistry from its roots in alchemy and, for this reason, is sometimes known as the father of chemistry.

Boyle was born in Ireland in 1627. He was the fourteenth child of a wealthy and aristocratic family. By the time he was eight years old, he was already studying Latin and Greek. From 1639 to 1644, beginning when he was eleven, he traveled throughout Europe while being taught by a tutor. The following decade, Boyle lived partly in England and partly on his estates in Ireland. His father had died by this time, and Boyle's inherited wealth gave him the money and the freedom to pursue scientific experiments.

More summaries and resources for teaching or studying Robert Boyle.

Robert Boyle from Gale. ©2005-2006 Thomson Gale, a part of the Thomson Corporation. All rights reserved.