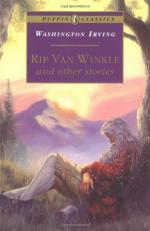 "Rip Van Winkle" - Research Article from Literature and Its Times

Washington Irving was born in 1783 in New York City, shortly before the end of the American Revolution. He grew up in an era of rapid change for New York and the Hudson River Valley. The region's traditional Dutch culture, which played an important part in Irving's imaginative development, was beginning to fade due to the influence of new settlers from other areas of New England and other forces of modernization. As these changes unfolded Irving felt a sense of loss that he eventually expressed in his work.

Dutch heritage in the Catskill Mountain region. In 1609 Henry Hudson, an employee of the Dutch East India Company, explored the river that has since been named for him. The first group of permanent settlers to lay claim to the region that became New...

"Rip Van Winkle" from Gale. ©2008 Thomson Gale, a part of the Thomson Corporation. All rights reserved.