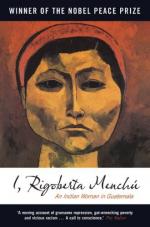 Rigoberta Menchú is a dedicated advocate for the human rights of indigenous (native) peoples of Latin America. Born to a peasant Mayan Indian family in the highlands of Guatemala, Menchú’s childhood was marred by poverty and military-inflicted violence. She joined the movement for social justice and worked for change until driven from the country by death threats. After her exile to Mexico, Menchú continued her efforts for human rights.

In her 1983 autobiography, I, Rigoberta Menchú, Menchú brought the story of the suffering of indigenous Guatemalans to the world. In 1992 she was awarded the Nobel Peace Prize.

Rigoberta Menchú was born in 1959 in the village of Chimel, in the remote highlands of the El Quiché province in Guatemala. Her family belonged to...

More summaries and resources for teaching or studying Rigoberta Mench.

Rigoberta Menchú from UXL. ©2005-2006 by U•X•L. U•X•L is an imprint of Thomson Gale, a division of Thomson Learning, Inc. All rights reserved.