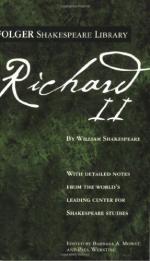 Richard II - Research Article from Science and Its Times

English king who in 1388 established the first sanitary laws in his country. Son of Edward the Black Prince and grandson of Edward III, whom he succeeded as king in 1377, Richard initially ruled through regents. During his reign, Wat Tyler's Rebellion (1381) was brutally suppressed in spite of efforts by the youthful king to end the trouble peaceably. In a 1399 struggle with Henry of Bolingbroke, the future Henry IV, he was deposed and placed in prison, where he died a year later. Richard's wife, Queen Anne (1366-1394), invented the sidesaddle.

More summaries and resources for teaching or studying Richard II.

Richard II from Gale. ©2005-2006 Thomson Gale, a part of the Thomson Corporation. All rights reserved.