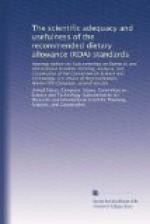 Recommendations for dietary intake of specific amounts of essential substances for healthy growth.

Recommended Dietary Allowance (RDA), is a set of recommendations for dietary intake of specific amounts of essential substances for healthy growth.

The Food and Nutrition Board of the National Research Council suggests ingestion of specific amounts of essential substances for the body to function normally. These amounts are estimates, and are updated regularly (usually about every five years) to reflect new research findings. The Food and Nutrition Board began preparing these guidelines in 1941, with the first set of Recommended Dietary Allowances published in 1943. The eighth edition of the guidelines, published in 1974, established the defininition of recommended dietary allowances as follows: "the levels of intake of essential nutrients that, on the basis of scientific knowledge, are judged by the Food and Nutrition Board to be adequate to meet the known nutrient needs of practically all healthy persons. "

RDAs are distinct from, but related to, the Reference Daily Intake (RDI) developed by the Food and Drug Administration to be used in food labelling. RDI replaced the term U.S. Recommended Daily Allowances, which was used until new food labelling regulations went into effect in late 1992. All packaged foods were required to bear the new term on labels as of May 1994. Because RDAs and RDIs are widely used, it is important to understand generally how to interpret them. The recommended allowances for nutrients are amounts intended to be consumed as part of a normal diet, and are neither minimum requirements nor optimal levels of intake; it is not possible based on current research to set such specific guidelines, nor to set a specific amount that would apply to all individuals. Rather, RDAs are safe and adequate levels of intake that reflect current knowledge.

The recommended dietary allowances for infants, children, and adolescents are prepared by the National Research Council.

Recommended Dietary Allowance (Rda) from Macmillan. Copyright © 2001-2006 by Macmillan Reference USA, an imprint of the Gale Group. All rights reserved.