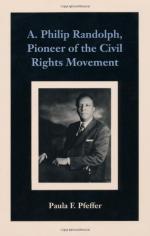 This encyclopedia article consists of approximately 8 pages of information about Randolph, A. Philip.

A. Philip Randolph. Courtesy of the Library of Congress.

"As a youngster, Randolph listened to his father's parishioners [church members] complain about the problems of racial prejudice. This exposure, combined with the experience of growing up in segregated Jacksonville [Florida]…raised his consciousness."

Paula F. Pfeffer in A. Philip Randolph: Pioneer of the Civil Rights Movement

A.Philip Randolph was one of the most important black labor leaders of the twentieth century and was highly influential in the civil rights movement of the 1950s and 1960s. Unlike many other black leaders, Randolph sought social justice for black Americans primarily through increased economic opportunities. He formed a number of organizations to raise public awareness of the lack of opportunities in business and education for black Americans. He also organized...

More summaries and resources for teaching or studying Randolph, A. Philip.