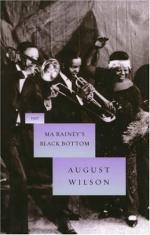 Gertrude "Ma" Rainey is known as the "Mother of the Blues." Born Gertrude Pridgett in Columbus, Georgia, on April 26, 1886, Rainey was the first woman known to sing the blues, combining country blues simplicity with more urban styles. Her accompanists included Louis Armstrong and Fletcher Henderson. More commonly, however, her accompaniment consisted of an old-style jug or a washboard band.

Rainey began her entertainment career when she was still a teenager. At fourteen, she started singing in front of audiences, and not long thereafter she began touring with the Rabbit Foot Minstrels.

Ma Rainey, sitting, in a promotional photo for the Rabbit Foot Minstrels.
It is commonly held that while touring with the Minstrels she taught Bessie Smith. Rainey is given credit for being the first woman to bring the blues into the popular entertainment of her day—vaudeville...