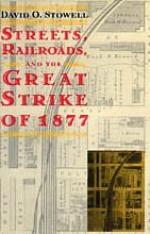 This encyclopedia article consists of approximately 10 pages of information about Railroad Strike of 1877.

In 1877 an explosion of working-class protest rocked the United States. Initiated as a more or less spontaneous railway workers strike, it became generalized into a nationwide crescendo of street protests and pitched battles. Millions of dollars of property was destroyed, more than a hundred lives were lost, with many more injuries. Pittsburgh, Pennsylvania, was at the explosive center of this historic upsurge, but similar confrontations and struggles wracked cities throughout the eastern and midwestern portions of the country. The uprising was systematically repressed but helped to generate future labor struggles.

More summaries and resources for teaching or studying Railroad Strike of 1877.