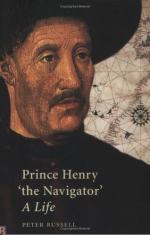 Prince Henry the Navigator - Research Article from Science and Its Times

This encyclopedia article consists of approximately 4 pages of information about Prince Henry the Navigator.

Prince Henry of Portugal did not earn the title "The Navigator" because he himself sailed the seas. In fact, Henry did not venture out on any of his country's many expeditions. But his quest to establish Portugal as one of the wealthiest trading nations in the world drove his country's ships further down the African coast than any previous European missions. During his lifetime, Prince Henry not only made significant advances in navigation and shipbuilding, he helped establish Christian Europe's authority over Africa and Asia, while breaking down Muslim control over trade and sea routes.

Prince Henry was born in 1394, the third son of the Portuguese monarch King John I and his wife Queen Philippa, sister of England's King Henry IV. He was taught to be a great statesman and soldier, and proved himself as both...

More summaries and resources for teaching or studying Prince Henry the Navigator.

Prince Henry the Navigator from Gale. ©2005-2006 Thomson Gale, a part of the Thomson Corporation. All rights reserved.