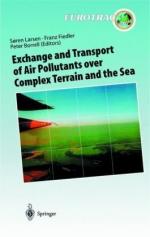 This encyclopedia article consists of approximately 2 pages of information about Primary Pollutant.

Primary pollutants cause pollution by their direct release into the environment. The substance released may already be present in some quantities, but it is considered a primary pollutant if the additional release brings the total quantity of the substance to pollution levels. For example, carbon dioxide is already naturally present in the atmosphere, but it becomes toxic when additional releases cause it to rise above its natural concentrations. The rise in levels of carbon dioxide is one contributing factor to the greenhouse effect.

The direct release into the atmosphere of a chemical that is not normally present in the air is also classified as a primary pollutant. Hydrogen fluoride, for example, is released from some coal-fired furnaces, but the compound is not usually present in unpolluted air.

A primary pollutant can be generated by many sources: pesticide dust sprayed intensively in agricultural areas, emissions from car and industrial exhausts, or dust kicked about from mining operations, to name a few. Some primary pollutants are composed of particulate matter that is not easily dispersed. Smoke, soot, dust, and liquid droplets released into the air either by the burning of fuel or other industrial or agricultural processes, are considered primary pollutants.

Primary pollutants also originate from natural sources. Volcanic ash, as well as grit and dust from volcanic explosions belong to this category. Salt dust blown inland by strong oceanic winds or gaseous pollution that originates from bogs, marshes, and other decomposing matter can also be classified as primary pollutants.

Ney, R. E. Where Did That Chemical Go? A Practical Guide to Chemical Fate and Transport in the Environment. New York: Van Nostrand Reinhold, 1990.

More summaries and resources for teaching or studying Primary Pollutant.

Primary Pollutant from Gale. ©2005-2006 Thomson Gale, a part of the Thomson Corporation. All rights reserved.