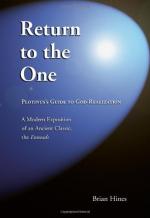 This encyclopedia article consists of approximately 1 page of information about Plotinus [addendum].

What is it, Plotinus asks (Plotinus 1956), that lures the eye toward a beautiful sight and that draws the ear to a beautiful sound? It is the thrill that the soul feels in sensing its affinity with the noble being that manifests itself in those beautiful sights and sounds. Material things become beautiful by sharing in Form and thus in Unity. This applies to the productions of artists as much as to the beauties of nature. Thus the true objects of artistic imitation are Form and Unity; and so the artist is always entitled to "add where nature is lacking" (Plotinus 1956). Beauty is also found in noble conduct, in excellent laws, and in human virtue. The virtuous soul acquires Beauty and becomes godlike by purifying itself from evil. Thus Beauty in general has a metaphysical significance through its relation to Form, the One, and to the divine. In Plotinus's eyes, Beauty's significance is not only metaphysical but quasi-religious, not only because of its relationship to the divine, but also because Beauty is what draws the soul onwards in its ascent to the suprasensible world whence it came (Plotinus 1956).

Plotinus. The Enneads. Translated by Stephen McKenna, revised by B. S. Page, with a foreword by E R Dodds and an introduction by P Henry. 2nd ed. London: Faber and Faber, 1956.

More summaries and resources for teaching or studying Plotinus [addendum].

Plotinus [addendum] from Macmillan. Copyright © 2001-2006 by Macmillan Reference USA, an imprint of the Gale Group. All rights reserved.