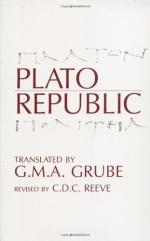 Plato - Research Article from Science and Its Times

This encyclopedia article consists of approximately 1 page of information about Plato.

One of the most influential of ancient Greek philosophers and a student of Socrates. He Founded the Academy, a school of higher education that lasted nearly 1,000 years. Aristotle studied there for nearly 20 years. Plato wrote many texts, most notably the Republic, wherein the ideal society is described as one led by philosopher-kings, and democracy is rejected as a valid form of government. He argued that reality is divided into a world of senses, of which we only can have incomplete knowledge, and a world of ideas, of which we can have true and complete knowledge. For example, every circle we see contains some imperfection—in other words, it is only an approximation of an ideal circle. We know what a circle is by comprehending the idea, or "form," of the circle.

Plato from Gale. ©2005-2006 Thomson Gale, a part of the Thomson Corporation. All rights reserved.