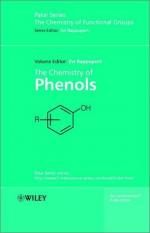 This encyclopedia article consists of approximately 2 pages of information about Phenol.

Serious open wounds are nearly always invaded by germs unless the wound is treated with an antiseptic. Until the 1860s, doctors had no way to prevent open wounds from becoming infected, and a large percentage of the patients who had otherwise successful surgeries died from infection. Then British surgeon, Joseph Lister, began applying a dilute solution of phenol to tissues torn by compound fractures (broken bones protruding through the skin), becoming the founder of modern antiseptic surgery. He also suggested that phenol be sprayed in operating rooms during surgery. Although this idea did not work well, Lister had begun the attempt to control surgical contamination.

Phenol (C6H5OH), a poisonous organic acid also called carbolic acid, is still used today in hospitals as a powerful disinfectant to sterilize floors, walls, and instruments. Phenol can be manufactured from the hydrocarbons benzene and propylene. Under ordinary conditions, it takes the form of white crystals that can be dissolved in water or alcohol. Concentrated solutions can burn the skin severely, and if swallowed, can cause death.

Phenol was discovered in the 1650s by German chemist, Johann Rudolf Glauber (1604-1668), who obtained it by condensing coal tar vapors. Little was known of phenol's properties for nearly two hundred years until another German chemist, Friedlieb Ferdinand Runge (1795-1867), isolated phenol in 1834 and named it carbolic acid. In 1843, phenol's modern name was introduced by French chemist, Charles Frederic Gerhardt (1816-1856), who used a different method to prepare the acid. Large-scale manufacture of phenol began during the 1860s. At first, phenol was produced from coal tar, but processes were later developed for manufacturing phenol from petroleum. The compound was first synthesized from benzene in 1867 by French organic chemist, Charles Adolph Wurtz (1817-1884), and August Friedrich Kekule von Stradonitz.

Phenol is now widely used in industry as a feedstock for manufacturing plastics. The resin created when phenol is mixed with formaldehyde can be processed into a hard plastic material called bakelite, which was first produced in 1907. Phenol is also used to make adhesives, weed killers, germicidal paints, drugs, and other chemicals.

More summaries and resources for teaching or studying Phenol.

Phenol from Gale. ©2005-2006 Thomson Gale, a part of the Thomson Corporation. All rights reserved.