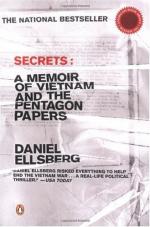 This encyclopedia article consists of approximately 4 pages of information about Pentagon Papers.

By 1967, Secretary of Defense Robert McNamara was becoming very pessimistic about the Vietnam War. He no longer believed it could be won at acceptable cost.

American casualties were growing, and public support for the war was getting shaky. He created a task force in the Defense Department to study how the United States had gotten into this fix. In 1969 the task force completed a top-secret history of U.S. policy from 1945 through early 1968, accompanied by thousands of pages of classified documents. Officially titled United States-Vietnam Relations, 1945–1967, it is usually called the Pentagon Papers.

Daniel Ellsberg had spent more than a year in Vietnam as a roving investigator for the U.S. government. What he saw convinced him that U.S. policy...

More summaries and resources for teaching or studying Pentagon Papers.

Pentagon Papers from Macmillan. Copyright © 2001-2006 by Macmillan Reference USA, an imprint of the Gale Group. All rights reserved.