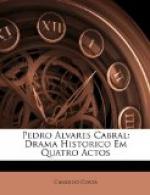 Pedro ÁLvares Cabral - Research Article from Science and Its Times

This encyclopedia article consists of approximately 1 page of information about Pedro &#XC1;Lvares Cabral.

Portuguese navigator who is credited with the discovery of Brazil. Cabral was born into a family of great privilege, held in high esteem among the Portuguese royal family. He spent many years in the service of King Manuel I, who in 1500 entrusted him to lead an expedition of 13 ships to India. Cabral was to follow the route taken by Vasco da Gama, and was charged with cementing trade alliances between India and Portugal. After sailing far westward of his course, Cabral landed in the country he called Island of the True Cross, which would later be renamed Brazil. He took possession of the country for Portugal, and dispatched one of his ships to send word of his conquest to the king. Cabral spent only 10 days in Brazil, before setting sail once again for India. After a voyage fraught with disaster, his fleet cast anchor at Calicut, India, where he entered into a fierce battle against Muslim soldiers. Many of Cabral's crew were killed in the struggle, but the Portuguese eventually prevailed, seizing 10 Muslim ships. He then sailed for the port of Cochin, and there established successful trade relations with local merchants. Cabral returned to Portugal in 1501.

Pedro ÁLvares Cabral from Gale. ©2005-2006 Thomson Gale, a part of the Thomson Corporation. All rights reserved.