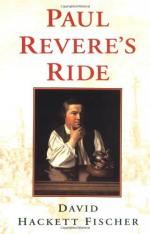 This encyclopedia article consists of approximately 9 pages of information about Paul Revere.

"I alarmed the Captain of the Minute Men, and after that I alarmed almost every house till I got to Lexington … [crying] 'The Regulars [British soldiers] are out! The Regulars are out!'"
Portrait: Paul Revere. Reproduced by permission of Archive Photos, Inc.

Paul Revere, one of colonial Boston's leading silver artisans, was accomplished in several fields. This creative and versatile man was an innovator in the processing of copper and bronze and an important political organizer in Revolutionary Boston. He is best known as the subject of a famous poem by Henry Wadsworth Longfellow titled Paul Revere's Ride.

Paul Revere's father was a man of French descent named Apollos De Rivoire (pronounced ah-po-LOW duh ruh-VWAR), who later changed his last name to the simpler Revere. He came as a boy to...

More summaries and resources for teaching or studying Paul Revere.