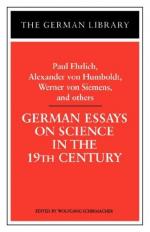 Paul Ehrlich - Research Article from Science and Its Times

This encyclopedia article consists of approximately 3 pages of information about Paul Ehrlich.

Paul Ehrlich was a German bacteriologist who made tremendous contributions to medical science in the areas of immunology, hematology, and pathology. Although he was awarded the Nobel Prize for Physiology or Medicine in 1908 in conjunction with Elie Metchnikoff (1845-1916) in recognition of their work in immunology, he is best known as the pioneer of chemotherapy. He created the first successful treatment for syphilis. In another noteworthy accomplishment, Ehrlich put forth the side-chain theory, becoming the first person to attempt to correlate the chemical structure of a synthetic drug with its biological effects.

Paul Ehrlich was born in Germany on March 14, 1854, into a family of Jewish faith. His father was prominent in business and industry, while his mother was the aunt of exceptional bacteriologist and scientist Karl Weigert. His early education was at the Gymnasium at Breslau. Following that, he attended various institutions, which...

More summaries and resources for teaching or studying Paul Ehrlich.

Paul Ehrlich from Gale. ©2005-2006 Thomson Gale, a part of the Thomson Corporation. All rights reserved.