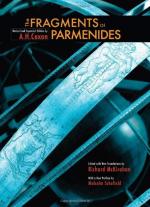 Parmenides - Research Article from Science and Its Times

This encyclopedia article consists of approximately 3 pages of information about Parmenides.

In a fragmentary poetic text, Parmenides outlined what he described as "The Way of Truth"—that is, the way of intellect, which penetrates the unchanging nature of true being—and "The Way of Opinion," or of the senses. Not only does this allegory represent one of the first attempts at philosophical discourse, but it had numerous (mostly unintended) implications for the development of scientific thought.

Born in Elea in southern Italy, Parmenides may have traveled to Athens in about 450 B.C.; this, at least, is the account provided by Socrates (470?-399 B.C.) in Plato's (427?-347 B.C.) Thaetetus. Aside from this detail, little else is known about his life, but from his philosophy—not to mention the fact that he came from an area where Pythagorean thought prevailed—it appears that he was heavily influenced by the ideas of Pythagoras (580?-500? B...

Parmenides from Gale. ©2005-2006 Thomson Gale, a part of the Thomson Corporation. All rights reserved.