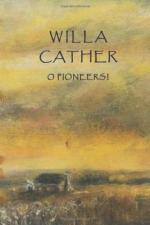 O Pioneers! - Research Article from Literature and Its Times

Born in 1873, Willa Cather moved with her family to Webster County, Nebraska, when she was nine years old. Nebraska was an untamed prairie at the time and one inhospitable to settlement. Its dry, hard soil and a lack of trees and greenery made the territory highly unsuitable for farming and living. But encouraged by the federal Homestead Act of 1862, which promised 160 acres to anyone who settled the land, pioneers moved to the region by the thousands and eventually transformed it into the breadbasket of America. Lather wrote O Pioneers! based on her experiences as a second-generation immigrant homesteader. In the novel she tells the story of a pioneer family in turn-of-the-century Nebraska, portraying the struggles these early pioneers endured, the hardships they overcame, and physical and cultural transformation they wrought upon the territory in which they lived.

More summaries and resources for teaching or studying O Pioneers!.

O Pioneers! from Gale. ©2008 Thomson Gale, a part of the Thomson Corporation. All rights reserved.