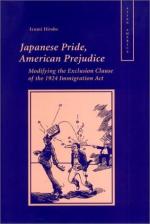 This encyclopedia article consists of approximately 8 pages of information about National Origins Act.

Immigrants arrive at Ellis Island. The Library of Congress.

The National Origins Act, sometimes referred to as the Johnson-Reed Act, represented the culmination of early twentieth-century anti-immigration sentiment. The act sharply restricted the total number of immigrants who could come to the United States and established quotas for various nationality groups. The chief purpose of the act was to limit the number of "less desirable" immigrants from southern and eastern Europe and from Japan, many of whom had played a vital role in the nation's industrial development.

National Origins Act from Gale. ©2005-2006 Thomson Gale, a part of the Thomson Corporation. All rights reserved.