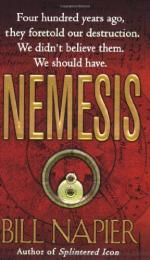 This encyclopedia article consists of approximately 2 pages of information about Napier&#x0027;s Bones.

Scottish mathematician John Napier (1550–1617) created Napier's Bones, so-called because they were made out of ivory or bone.

Although John Napier is mainly remembered for the invention of logarithms, he considered mathematical studies as a hobby. Born in the mid-1500s into a wealthy Scottish family, Napier was able to pursue all manner of subjects from religion to politics to agriculture during his life.

In 1617, shortly before his death, Napier developed a mechanical method for performing multiplication and division. This method, known as "Napier's bones," was based upon manipulation of rods with printed digits. The rods were made of bone, ivory, wood, or metal. Napier's bones became a very popular device for calculating in England and western Europe, because most people lacked these mathematical skills.

The set is composed of ten bones, nine of which display the multiples of a given number between one and nine. For example the "two" rod contains 02, 04… 18: multiples of two. The tenth bone, known as the index, displays the numerals 1 through 9. To multiply 6 by 58, the index bone is placed beside the 5 and 8 bones. The value for 6 5 from the 58 is read from the sixth location on the five bone, i.e. 30, and it is placed in the hundreds column. Then 6 8 is read from the sixth location on the 8 bone, i.e. 48, and this is placed in the tens column. The columns are added together, resulting in 348.

This method of adding and subtracting applied to logarithmic values resulted in the development of the slide rule. As late as the 1960s, English children used Napier's bones to learn multiplication.

More summaries and resources for teaching or studying Napier's Bones.

Napier's Bones from Macmillan. Copyright © 2001-2006 by Macmillan Reference USA, an imprint of the Gale Group. All rights reserved.