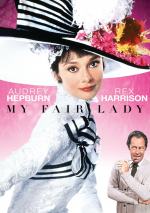 Get My Fair Lady from Amazon.com
View the Study Pack
Encyclopedia Article
My Fair Lady

George Cukor
This encyclopedia article consists of approximately 1 page of information about My Fair Lady.

My Fair Lady, written by Alan Jay Lerner and Frederick Loewe was one of the most popular musical play of the 1950s. Its initial New York run, which began on March 15, 1956, lasted six and a half years for a total of 2,717 performances. The story of phonetician Henry Higgins, who transforms the Cockney flower girl Eliza Doolittle into a society lady through teaching her correct speech, was based on the George Bernard Shaw play Pygmalion and included such musical numbers as "I Could Have Danced All Night," "On the Street Where You Live," "The Rain in Spain," and "Get Me to the Church on Time."

More summaries and resources for teaching or studying My Fair Lady.

My Fair Lady from Gale. ©2005-2006 Thomson Gale, a part of the Thomson Corporation. All rights reserved.