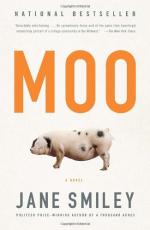 Moos and Muds - Research Article from World of Computer Science

Jane Smiley
This encyclopedia article consists of approximately 1 page of information about Moos and Muds.

MOOs and MUDs allow users to communicate with each other by writing messages. They are similar to a chat room. However, the other inhabitants of the programmed environment may not be human. They may, for example, be robots designed by the programmer of the particular MOO or MUD, that will interact with the user and other inhabitants of the room in programmed ways. In Dungeons and Dragons, for example, the MUD was a text-based description of an alternate reality where those who had logged on to the game met creatures who were, in fact, other players that were also participating in the game.

MOOs and MUDs are no longer restricted to computer games. Their utility as on-line interactive chat room-like environments has been developed for a wide range of academic and social uses. For example, on-line classes and conferences are held in MOO seminar rooms. MUDs are now also known as 3-D worlds and chat worlds, reflective of their importance as non-gaming electronic meeting places.

More summaries and resources for teaching or studying Moos and Muds.

Moos and Muds from Gale. ©2005-2006 Thomson Gale, a part of the Thomson Corporation. All rights reserved.