(c)1998-2002; (c)2002 by Gale. Gale is an imprint of The Gale Group, Inc., a division of Thomson Learning, Inc. Gale and Design and Thomson Learning are trademarks used herein under license.

The following sections, if they exist, are offprint from Beacham's Guide to Literature for Young Adults: "About the Author", "Overview", "Setting", "Literary Qualities", "Social Sensitivity", "Topics for Discussion", "Ideas for Reports and Papers". (c)1994-2005, by Walton Beacham.

All other sections in this Literature Study Guide are owned and copyrighted by BookRags, Inc.

Monsoon (from Arabic, mausim, season) technically means a reversal of winds, that point between the dry and the wet seasons in tropical and subtropical India, Southeast Asia, and parts of Africa and Australia, when seasonal winds change their direction. When the land heats up, the hot air rises, causing a low pressure zone that sucks in moisture-filled cooler ocean air, creating clouds and producing rain. In winter, the opposite happens: warm air over the ocean rises and makes a low pressure zone that draws the cooler air off the land. 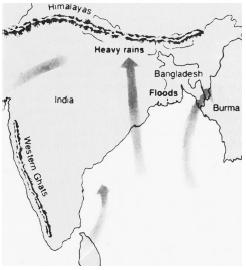 Each summer, warming air rises over the plains of central India, creating a low-pressure cell that draws in warm, moisture-laden air from the ocean. Rising over the Western Ghats or the Himalayas, the air cools causing heavy monsoon rains. (McGraw-Hill Inc. Reproduced by permission.)

Although monsoon winds have always been watched by traders and sailors in the Eastern Hemisphere, their arrival is critical to millions of people who depend on agriculture. Cultural and religious customs, especially in India and southeast Asia, are tied to the monsoon rains that bring a season of fertility after a long hot and sterile dry period.

Coastal radar and satellites aid in weather prediction, but the climatological components of monsoons are complex. Tied to the heat and moisture exchange between land and oceans, their effect can be altered by changes in the circulation of hemispheric winds at the equator, as well as by precessional changes in the orbit of the earth.

Environmental changes such as deforestation or soil erosion can invite severe flooding, as in Bangladesh during the 1980s. Scientists believe a rise in sea surface temperature in the Atlantic Ocean, possibly related to the greenhouse effect, prevented the monsoon rain from reaching the African Sahel and contributed to recent droughts. This ocean temperature rise may also be tied to the El Niño event in the Pacific Ocean.

Any fluctuations in monsoon rain patterns can cause disease and death, along with millions of dollars in damage. If the rains are delayed, or never come, or fall too heavily in the beginning or at the end of the growing season, disastrous results often follow.