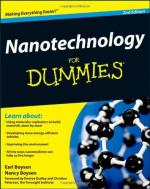 This encyclopedia article consists of approximately 2 pages of information about Molecular Switches.

Molecular switches are a part of the discipline of nanotechnology—making operational machines of atomic dimensions. Specifically, a molecular switch is composed of atoms of material that function as a switch, or a logic gate. A logic gate is a necessary computing component, used to represent ones and zeros, the binary language of digital computing. Molecular switches would permit an atomic form of random access memory--a key computer operation that allows users to store and manipulate information.

To date, molecular switches remain more a possibility than a reality, although several research groups have manufactured atomic sized complexes that are capable of conducting electricity. In 1999, researchers from Rice University in Houston, Texas used chemical methods to manufacture a molecular switch that cold be turned on and off in a reversible manner. The chemical switch is some one million times smaller than the current silicon switches, creating the potential for further miniaturization of computers. Another research team from the Center for Nanoscale Science at the University of Liverpool, United Kingdom, has been able to control the current flowing through another type of molecular switch constructed of a gold particle six millionths of a meter in diameter linked to wires made of organic molecules strung together. By applying voltage, the electrical current flowing through the wires to the gold particle can be turned on and off. Others have been able to demonstrate electrical conductance through tubes of carbon that are smaller than a filament of DNA. Finally, a research team from UCLA has constructed two interlocked rings of a molecule called a catenane. Electrically-induced rearrangement of the rings in a reversible manner allows electron flow

The promise of such molecular switches depends on the ability to organize the tiny structures into functional devices, and then to marry these devices to electrical contacts so those machines of atomic dimensions can be built. Not only would the machines be appreciably smaller than anything possible at present, but such molecular computers would be far more powerful than those available now using silicon-based logic gates.

More summaries and resources for teaching or studying Molecular Switches.

Molecular Switches from Gale. ©2005-2006 Thomson Gale, a part of the Thomson Corporation. All rights reserved.