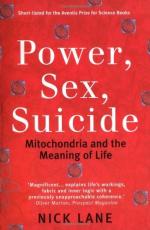 This encyclopedia article consists of approximately 1 page of information about Mitochondria.

Mitochondria are double membrane-bound cytoplasmic organelles (they are enclosed by two independent lipoprotein membranes) found in almost all higher plant and animal cells. Although they vary considerably in size and shape even within a single cell over time, mitochondria are usually bean-shaped or thread-like with an average diameter of about 0.5 nm and a length ranging from one to hundreds of meters. Mitochondria often move rapidly around the cell interior, constantly changing size or shape. There might be a few giant interconnected mitochondrial networks in a cell at one time, or they may break up into hundreds or thousands of individual mitochondria under different conditions.

Mitochondria serve as the principle energy source for all animal cells and for plant cells when light is absent. A complex set of enzymes and cofactors located both in the interior of the mitochondrion and in its inner membrane carry out a series of reactions that break down energy-rich organic compounds. The energy released by these reactions is captured by a process called oxidative phosphorylation and used to generate adenosine triphosphate (ATP), a stable chemical compound that serves as the currency for macromolecular synthesis, mechanical motion, transmembrane transport, and almost all other metabolic and physiological activities at the cellular level.

It is widely believed that mitochondria probably arose sometime far back in history as a result of a symbiotic relationship between a prokaryotic (bacterial-like) cell and a nucleus-containing proto-eukaryotic cell. Mitochondria have many similarities to free-living bacteria including their own genetic material and a bacterial-like protein synthesizing system. There are also many similarities between the enzymes that carry out oxidative phosphorylation in mitochondria and those that are responsible for photosynthesis in chloroplasts, suggesting that one of these systems might be evolutionary descendants of the other.

More summaries and resources for teaching or studying Mitochondria.

Mitochondria from Gale. ©2005-2006 Thomson Gale, a part of the Thomson Corporation. All rights reserved.