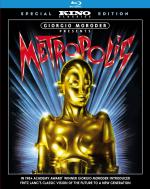 Fritz Lang
This encyclopedia article consists of approximately 1 page of information about Metropolis.

Although made at the UFA Studios in Germany, Fritz Lang's visionary silent film Metropolis (1926) was inspired by a visit the director had made to New York, on whose skyline its massive and impressive sets were based. The innovative pioneering special effects were created by Eugen Schufftan (who, like Lang, later fled the Nazis, settling in Hollywood as cinematographer Eugene Shuftan). The Schufftan Process combined life-size models with live action. Despite criticism about the weakness of its plot, and the naivety of its resolution, Metropolis remains one of the most expressive testimonies of its age. A potent allegory against totalitarianism, the film reveals not only political conflicts, hopes, and fears, but also enthusiasm for technology and the American way. With its combination of powerful architectural metaphors, its gallery of contemporary visions, technological experimentation, and political philosophy, Metropolis marked an influential and important turning point in the development of film art. The film was admired around the world, although its huge production costs brought UFA to the edge of bankruptcy. In 1984, Giorgio Moroder edited the film's original 153 minutes down to 83, and added tinted sequences and a rock score.

More summaries and resources for teaching or studying Metropolis.

Metropolis from Gale. ©2005-2006 Thomson Gale, a part of the Thomson Corporation. All rights reserved.