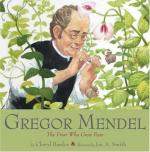 This encyclopedia article consists of approximately 3 pages of information about Mendel, Gregor.

Gregor Mendel, the father of genetics, was born on July 22, 1822, in Heinzendorf, Austria. He died on January 6, 1884. He was the first person to propose the idea of genes and to apply mathematics to genetics. Although his work was initially ignored by scientists, it proved to be the basis of modern genetics.

Mendel's interest in natural science developed early. He studied at the Philosophical Institute at Olmütz for two years. In 1843 he entered the monastery in Brünn, becoming a priest in 1847. Then he went to the University of Vienna, where he studied science from 1851 to 1853. In 1854 Mendel returned to Brünn and taught natural science in the technical high school there until 1868.

Gregor Mendel was a pioneer in the field of genetics.

Seeking to learn how plants inherit different traits, Mendel began his experiments with garden peas in the small monastery garden in...

More summaries and resources for teaching or studying Mendel, Gregor.

Mendel, Gregor from Macmillan. Copyright © 2001-2006 by Macmillan Reference USA, an imprint of the Gale Group. All rights reserved.