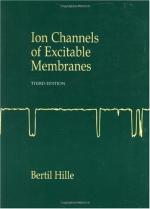 This encyclopedia article consists of approximately 2 pages of information about Membrane Structure.

Surrounding each cell within the nervous system is a highly complex lipid bilayer called a membrane formed by microscopic phospholipid molecules. Phospholipids have a round, negatively charged "head" consisting of phosphate, choline, and glycerol; and two "tails" comprised of fatty acids. The head is hydrophilic (likes water), but the tails are hydrophobic (do not like water). Because intra and extracellular fluids are aqueous (watery), the phospholipids huddle together in a double layer, the heads of the outer layer pointing toward the extracellular fluid and the heads of the inner layer pointing toward the intracellular fluid. The tails of both layers point away from the fluids and meet to form a hydrophobic environment between the heads. Molecules of cholesterol dotted throughout the membrane help prevent phospholipids from packing together too tightly.

The bilipid layer is variably permeable—some substances can move through while others cannot. Substances move through the membrane by 1) simple diffusion, in which low molecular weight substances pass directly through the membrane down their concentration gradient (from areas of high to low concentration); 2) facilitated diffusion, in which minute channels in certain proteins allow charged molecules (ions) such as sodium, potassium, and hydrogen to flow in and out of the cell; and 3) active transport, in which sodium-potassium pumps operated by cellular energy (ATP) force ions across the membrane, often against their concentration gradient. The many different types of proteins interspersed throughout the membrane--some with a carbohydrate side chain--are essential for most of the membrane's functions: integral proteins run completely through the membrane, surface proteins are embedded in the outer layer only, inner proteins are in the inner layer only, and transmembrane proteins--which contain a tiny channel through which fluids can pass--also connect the intra and extracellular environments. Proteins join cells together to form cell groupings such as tissue, help keep the cell in shape by connecting to portions of the cytoskeleton, act as receptors for neurotransmitters and hormones, participate in enzyme activity to aid in metabolism and other functions, and control the movement of molecules into and out of the cell.

More summaries and resources for teaching or studying Membrane Structure.

Membrane Structure from Gale. ©2005-2006 Thomson Gale, a part of the Thomson Corporation. All rights reserved.