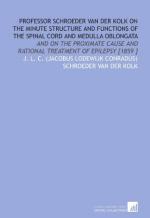 Medulla Oblongata - Research Article from World of Anatomy and Physiology

This encyclopedia article consists of approximately 1 page of information about Medulla Oblongata.

Along with the cerebellum and the pons, the medulla oblongata makes up that portion of the brain called the hindbrain. So necessary are the functions of the medulla oblongata that with its loss comes instant death. Lying crossways between the higher brain and the body, it controls several basic autonomic functions including respiration. Located on the lowest portion of the brain stem it looks like the swollen tip of the spinal chord. Not only does it serve as the main conduit for nerve impulses that enter and leave the higher neural systems, it also functions as the pathway for communication between the right and left hemispheres.

It is within the medulla that both the sensory and motor neurons from each hemisphere cross over. This is why the right hemisphere controls the left side of the body and visa versa. As one of the most primitive areas of the brain, it regulates some of the more basic functions required for life. These include the involuntary processes of swallowing and digestion as well as breathing. It also regulates the heartbeat and the diameter of certain blood vessels-thus controlling blood flow. One could consider it the master control center for the autonomic nervous system. Partnered with the cerebellum it controls movement and along with the thalamus, it regulates states of arousal and sleep.

More summaries and resources for teaching or studying Medulla Oblongata.

Medulla Oblongata from Gale. ©2005-2006 Thomson Gale, a part of the Thomson Corporation. All rights reserved.