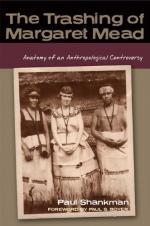 Margaret Mead - Research Article from Science and Its Times

This encyclopedia article consists of approximately 2 pages of information about Margaret Mead.

Margaret Mead was the first major anthropologist to study the fine details of child-rearing practices and learning theory within social groups. Based on her observations, Mead proposed that children learned through "imprinting." Much of Mead's work was interdisciplinary in nature, borrowing freely from psychology, anthropology, sociology, and other fields.

Mead was born in Pennsylvania, the oldest of four children. Her parents were teachers who taught Mead progressive values (by early twentieth-century standards) regarding the role of women in society. Mead's mother was a suffragette (a lobbyist for women's right to vote) who encouraged Mead to mix with children of all racial, ethnic, and economic backgrounds.

Mead undertook her college studies at Barnard College and became enthralled with anthropology. After graduating in 1923, she married and started graduate school at Columbia University. While still a graduate student, Mead made her first serious field observations on...

More summaries and resources for teaching or studying Margaret Mead.

Margaret Mead from Gale. ©2005-2006 Thomson Gale, a part of the Thomson Corporation. All rights reserved.