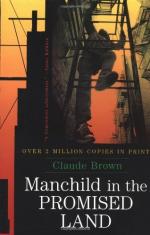 This encyclopedia article consists of approximately 13 pages of information about Manchild in the Promised Land.

Born in 1937 in Harlem, New York, Claude Brown spent his childhood "roaming the streets with junkies, whores, pimps, hustlers, the `mean cats' and the numbers runners" (Brown in Stine and Marowski, p. 33). Brown served several sentences in various reformatories until 1953, when after having seen too many of his friends die in drug-related crimes, he left Harlem for Greenwich Village, where he earned a living as a busboy and a watch repairman. Brown eventually enrolled in night school to earn his high school diploma, then in Howard University, where he began writing Manchild in the Promised Land.

Mid-twentieth-century Harlem. Throughout the first half of the twentieth century, waves of black migrants from the South inundated cities in the North such as Chicago and New York. They came in search...

More summaries and resources for teaching or studying Manchild in the Promised Land.

Manchild in the Promised Land from Gale. ©2008 Thomson Gale, a part of the Thomson Corporation. All rights reserved.