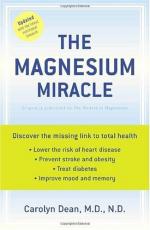 This encyclopedia article consists of approximately 6 pages of information about Magnesium.

Magnesium is the second element in Group 2 (IIA) of the periodic table a chart that shows how chemical elements are related to each other. The elements in Group 2 are known as the alkaline earth elements. Other elements in that group include beryllium, calcium, strontium, barium, and radium.

Compounds of magnesium have been used by humans for centuries. Yet, the element itself was not isolated until 1808. The long delay occurred because magnesium forms very stable compounds. That means that such compounds do not break down very easily.

Magnesium is the seventh most abundant element in the Earth's crust. It also occurs in large amounts dissolved in ocean waters.

Large amounts of magnesium are used to make alloys. An alloy is made by melting or mixing two or more metals. The mixture has properties different...

More summaries and resources for teaching or studying Magnesium.