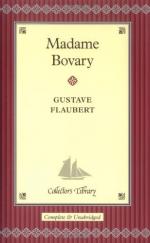 Madame Bovary - Research Article from Literature and Its Times

Born on December 12, 1821, Gustave Flaubert was the second son of Achille- Cleophas Flaubert, the chief physician of the main hospital in Rouen. The novelist's older brother, Achille, succeeded their father in the medical profession, while Gustave studied law in Paris and sought other avenues of advancement. In 1844 an illness resembling epilepsy left him a semi-invalid, and he proceeded to pursue a literary career. He set his first novel, Madame Bovary, in the Caux region, in northwest France, where he had grown up and would spend most of the rest of his life.

The bourgeoisie. The time between the onset of the French Revolution (1789) and World War I is often described as the era of the middle class. Flaubert's novel reflects this by featuring characters with shifting monetary profiles. As one scholar noted, "The main...

More summaries and resources for teaching or studying Madame Bovary.

Madame Bovary from Gale. ©2008 Thomson Gale, a part of the Thomson Corporation. All rights reserved.