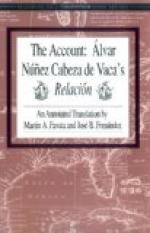 AIthough Álvar Núñez Cabeza de Vaca could have lived an easy life as a member of one of Spain’s noble families, he chose the hard and uncertain existence of an explorer. During his career he experienced triumph and disgrace. He had a unique ability to adapt to his surroundings, living for years among Native Americans as a medicine man and trader. His stories about the Seven Golden Cities of Cíbola probably inspired the explorations of Hernando de Soto and Francisco Vasquez de Coronado (see separate entries). Cabeza de Vaca blazed new trails for the Spanish in the New World.

Cabeza de Vaca was born in the town of Jerez de la Frontera, the...

Álvar Núñez Cabeza de Vaca from UXL. ©2005-2006 by U•X•L. U•X•L is an imprint of Thomson Gale, a division of Thomson Learning, Inc. All rights reserved.