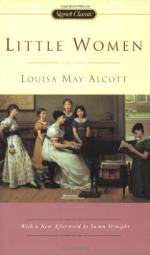 Little Women - Research Article from Literature and Its Times

Louisa May Alcott
This encyclopedia article consists of approximately 12 pages of information about Little Women.

by Louisa May Alcott

Born in 1832, Louisa May Alcott grew up in Concord, Massachusetts, which later became the setting of her most famous novel, Little Women. Most of the characters depicted in this highly autobiographical story resemble people Alcott knew as a young girl. Moreover, many of the March sisters' experiences in that novel are similar to those of Alcott and her own three sisters. In addition to these autobiographical elements, Little Women reflects much about the daily lives of nineteenth-century Americans growing up in New England during the heyday of philosophical and social reform.

Nineteenth-century women. For most females in nineteenth-century America, life centered around the home. A woman's time was largely spent providing a pleasant and comfortable place in which her family could live. Women who did not manage to achieve this contented domesticity were...

More summaries and resources for teaching or studying Little Women.

Little Women from Gale. ©2008 Thomson Gale, a part of the Thomson Corporation. All rights reserved.