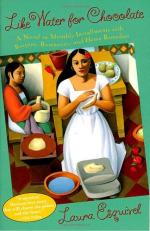 Laura Esquivel
This encyclopedia article consists of approximately 17 pages of information about Like Water for Chocolate.

Born in 1950 in Mexico, Laura Esquivel began her career as a screenwriter in partnership with her husband at the time, the director Alfonso Arau. Like Water for Chocolate was Esquivels first novel, and it almost immediately propelled her to international fame, with translations into over 30 languages and some 3 million copies sold worldwide. The 1992 film based on the book, whose screenplay was written by Esquivel herself, became the largest grossing foreign film ever released in the United States. Simultaneously defending traditional female activities while subverting stereotypical notions of femininity, Like Water for Chocolate shows how revolutionary historical processes can also resonate in everyday life.

Like Water for Chocolate from Gale. ©2008 Thomson Gale, a part of the Thomson Corporation. All rights reserved.