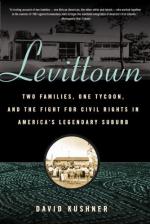 This encyclopedia article consists of approximately 3 pages of information about Levittown.

The brainchild of developer William J. Levitt, the first Levittown sprang to life in 1947 on 1,300 acres of potato fields on Long Island. When completed in 1951, it encompassed over 5,000 acres and some 17,500 single-family homes, making it the largest mass-produced housing development in American history. Proponents hailed Levittown and others communities like it as the fulfillment of America's promise of home ownership for returning veterans, but critics derided it for what they saw as its aesthetic and social deficiencies.

included a fully equipped kitchen. Although all the houses were nearly identical, cosmetic variations in window arrangement, carport placement, and roof lines prevented total uniformity. Subsequent developments in Pennsylvania (1952–1958) and New Jersey (1958–1961) offered a wider range of models and a more...

More summaries and resources for teaching or studying Levittown.

Levittown from Macmillan. Copyright © 2001-2006 by Macmillan Reference USA, an imprint of the Gale Group. All rights reserved.