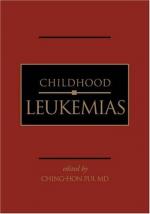 This encyclopedia article consists of approximately 1 page of information about Leukemia.

Leukemia is a disease of the blood-forming organs. Primary tumors are found in the bone marrow and lymphoid tissues, specifically the liver, spleen, and lymph nodes. The characteristic common to all types of leukemia is the uncontrolled proliferation of leukocytes (white blood cells) in the blood stream. This results in a lack of normal bone marrow growth, and bone marrow is replaced by immature and undifferentiated leukocytes or "blast cells." These immature and undifferentiated cells then migrate to various organs in the body, resulting in the pathogenesis of normal organ development and processing.

Leukemia occurs with varying frequencies at different ages, but it is most frequent among the elderly who experience 27,000 cases a year in the United States to 2,200 cases a year for younger people. Acute lymphoblastic leukemia, most common in children, is responsible for two-thirds of all cases. Acute nonlymphoblastic leukemia and chronic lymphocytic leukemia are most common among adults—they are responsible for 8,000 and 9,600 cases a year respectively. The geographical sites of highest concentration are the United States, Canada, Sweden, and New Zealand. While there is clear evidence that some leukemias are linked to genetic traits, the origins of this disease in most cases is mysterious. It seems clear, however, that environmental exposure to radiation, toxic substances, and other risk factors plays an important role in many leukemias.

More summaries and resources for teaching or studying Leukemia.

Leukemia from Gale. ©2005-2006 Thomson Gale, a part of the Thomson Corporation. All rights reserved.