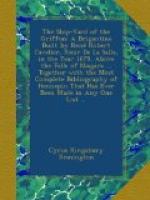 "Such was the end of one of the greatest men of an age, a man of admirable spirit, and capable of undertaking all sorts of explorations."

René-Robert Cavelier de La Salle was a celebrated French explorer who made great strides in the exploration of North America. As a young man he hoped to be a Jesuit missionary, but he became an explorer instead and later was vital as a builder of New France (present-day Quebec, Canada). After the French government granted La Salle the right to explore, trade, and construct forts in New France, he and his men set out across the Great Lakes in a specially...

La Salle, René-Robert Cavelier De from UXL. ©2005-2006 by U•X•L. U•X•L is an imprint of Thomson Gale, a division of Thomson Learning, Inc. All rights reserved.